“Dune Messiah continues the story of Paul Atriedes, better known–and feared–as the man christened Muad’Dib. As Emperor of the known universe, he possesses more power than a single man was ever meant to wield. Worshiped as a religious icon by the fanatical Fremen, Paul faces the enmity of the political houses he displaced when he assumed the throne–and a conspiracy conducted within his own sphere of influence.

And even as House Atriedes begins to crumble around him from the machinations of his enemies, the true threat to Paul comes to his lover, Chani, and the unborn heir to his family’s dynasty…” – the blurb on the back of my copy.

Probably don’t bother unless you really liked Dune. I read Dune Messiah (I prefer to call it “Dune 2” because I think it’s funny) because I wanted to know if the series was going to go into the ecological processes involved in making Dune a habitable planet as the Fremen, particularly those led by Liet-Kynes, wanted in the first book. Unfortunately it doesn’t really go into it that much. Ecological concepts feature more heavily in book 3, but never in the depth I was hoping for. 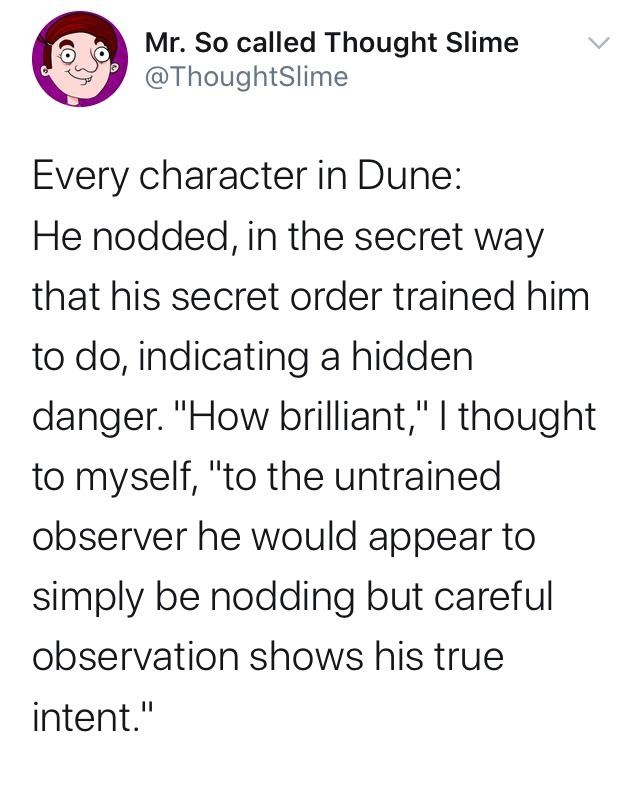 If Dune suffers from the tendency described in the above tweet, Dune 2 is almost dying from it. The first chapters are so dense with overwritten, cheesy discussions between political schemers that I put the book down for several days. The micro-level writing in book 2 isn’t any better than it was in book 1. There are whole paragraphs devoted to the colors of an ambassador’s clothes but virtually zero information about body language when Duncan and Alia or Paul and Chani are talking. Luckily, book 2 is about half the length, so it was a bit easier to get through.

I mentioned in my Dune review that Dune excels in the macro but falls short in the micro, in part because we never really spend enough time with the characters in the relative absence of plot to get to know them well enough to become invested in them as people. Dune 2, in contrast, is mostly scenes of characters either talking to each other or doing things alone, as opposed to ‘zoomed out’ descriptions of politics, religion, etc. A lot of this book read like Herbert really wanted to write a philosophical dialogue like Plato’s Phaedo. Most of the scenes in Dune 2 feature one character pontificating about something, and the other characters are only there to give the main speaker avenues to elaborate further. That being said, I think book 2 was a lot more emotionally impactful than the first. It was a bit more ‘zoomed in’ and, because of the pontificating, spent more time with the characters’ struggles.

Dune 2 starts the (honestly pretty funny but I’m here for it) tradition of making Duncan Idaho show up everywhere even after he died in the first book, a tradition that Wikipedia summaries of the later books (because I’m definitely not going to read 4 and beyond) suggest continues. The philosophical territory that Dune 2 covered with Duncan’s revival as Hayt was interesting and very sci-fi, dealing with questions of consciousness, memory, personality, and the transference of you-ness. It’s a different flavor of the concept that’s addressed in movies like Chappie–if you make a copy of your brain and upload it to create a conscious entity, to what degree is that entity you vs. just a perfect copy of you?

I disliked the shoehorned romance between Duncan/Hayt and Alia. It came off as clumsy and rushed, made painfully awkward by the lack of nuanced physical characterization of body language and other important interpersonal cues in Herbert’s writing. The forced romance also heralded the beginning of the end of Alia as a cool, independent, admirable female character. The most upsetting thing in books 2 and 3 of the Dune series to me is how thoroughly Herbert butchered Alia. There are zero women characters in the entire series (or at least in the 3 books I read) who aren’t attached to a man in a subordinate way. Alia had a chance to break that mold–Herbert sets her up to be a badass in the end of book 1 when she kills the Baron–but Herbert just tosses that in the dumpster with the clunky and unnecessary Duncan and Alia pairing in book 2 and then SUPER ruins her in book 3 (review to come).

The thematic direction Herbert took with Paul’s development in Dune 2 was hit and miss for me. The part with Paul still being able to “see” after having his eyes burned out was great; it was effective imagery for driving home with the reader how thorough and shackling his prescience was, and those scenes were more vivid to me than most of the rest of the book. Although Paul suffered plenty of personal consequences for being a despotic jihadist, there are virtually no interpersonal consequences for him. Everyone still loves him and thinks he’s wise and great. He loses Chani (refer back to my complaints about all the women characters being subordinate to their men–Chani’s death is written as being more about the cost to Paul than the loss of her own life) and his eyes, but he still has the unwavering support of the population as a whole and everyone in his inner circle. Even Irulan, who was part of the conspiracy against Paul, decides that she was actually in love with him the whole time. What an eyeroll.

I think Dune 2 was probably the least memorable of the trilogy for me, but it’s hard to say whether that’s due to its content or just the fact that it was about half the length of the other two books. It does have my favorite plot ending of the three, though–Paul saving his children from assassination and then walking into the desert to die the Fremen death of the physically crippled tribe member he had become. I’m interested to see how the movie adaptations (if they keep making them) handle this book.